Writing an About Us story can be a challenge, defining moments in partnerships are not always that obvious, but ours was a little different.  Got time for a quick story?

It started as neighbors, developed into a friendship, and then rapidly into a business partnership.  It didn’t take long to figure out that we shared a lot more than a first name.

Jason and I (also Jason) met many years ago, but back then it was just a friendly wave and a quick, neighborly greeting.  Until one day, I get a call from my wife who had just a moment before crashed into a neighbor’s car (a different neighbor, not Jason).

Here is the thing, my wife was hysterically crying and scared for her well-being.  The neighbor who she literally just bumped, was now out of his car and screaming at my wife while pounding on my wife’s car and demanding that she gets out of her car.  She could barely get her words out, and I could hear the legit fear in her voice, but I did happen to catch what she said before abruptly hanging up on me:

“Wait, someone is here to help me! I’ll call you right back.”

Of course, you know who our hero was this day.  Yep, it was Jason.   He wasn’t that guy to rip out his mobile phone and start taking video of the situation, hoping to have the next viral video in his hands.

Rather, which I have seen happen more often than it should, he immediately dropped what he was doing and came to help someone who was in need.

I’d like to think that I am that same guy, but it is rare to find someone who shares the same core values, beliefs, and ideas as you do.  Our desire to help really was the solid foundation of our relationship which quickly led to our partnership in pHAZE Naturals.

We both bring our own set of assets to the table, but with a group of products that we know will help endless amounts of people with what ails them, pHAZE was developed and becoming one of the fastest-growing brands in the industry.

At pHAZE, our mission is to bring you the best in the Hemp/CBD products that we can develop.  We will remain vertically integrated, handling every step of the process from seed to sale, to ensure that our products will be exactly what we promise them to be and will produce the results that our customers demand.  Beyond that, we have created our H.O.P.E. Program, where we will always do whatever we can to Help One Person Everyday. 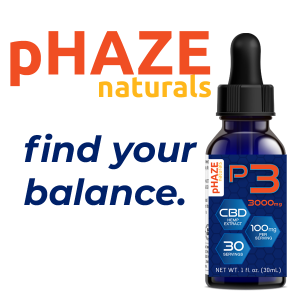 The End of the Story

Jason was quick to calm the situation down, after a few choice words and threats from the neighbor who my wife bumped into.  Sure it was a headache for him and not how he wanted to start his day.

Interestingly enough, the neighbor was dealing with some internal imbalance issues.  In dealing with the accident, the discussions led to pHAZE and the benefits of CBD.

That “looney tune” who had my wife in a complete panic that day, has become a regular customer and always quick to thank Jason and I for introducing him to pHAZE.

We both would like to continue that appreciation and  thank you for visiting and welcome you to the “pHAZE Phamily!”